“Designed by Helmith Thoms in 1963 for Typefounders of Phoenix, but released in 1965. […] Probably the only original production of Charles Broad.” [McGrew] Other sources give the designer’s name as Helmuth Thoms. [Briar Press]

City Slickers by Other Half & Arizona Wildernessc. 2016 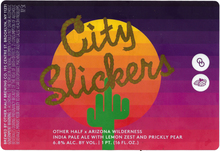