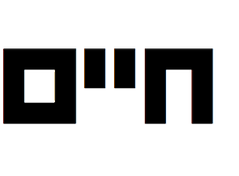 Designed by Jan Le Witt (1907–1991). Originally produced by the Warsaw based typefoundry Jan Idźkowski i S-ka in 1929 for the Yiddish market, Haim (or Chaim, חיים) became very popular for headlines and titles in Palestine in the 1930s. The narrow version of the typeface was produced by the same company only in 1936 (without the participation of Le Witt). [Philipp Messner]