BC 3018 is an initial alphabet. Its originally-intended use and inspiration comes from the sci-fi anthology “Dangerous Visions”. Contains a complete diacritic set in four variants, in addition to the full versal set, numbers, punctuation, currency and other symbols. With the complexity of its thousand-point pixel character, the alphabet is on the edge of what is technically possible for fonts and on the edge of possibilities for initial typefaces. [Briefcase Type Foundry] 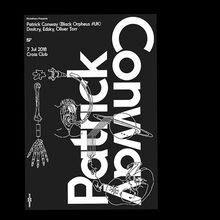