Shown in Photo-Lettering’s Alphabet Thesaurus Vol. 2 (1965) in a single weight, under two names; Caruso Roxy and Xenotype 5017, with many alternates. Vol. 3 (1971) shows a second lighter weight plus open variants, accompanied by Caruso Roxanne, a related face with tamer swirls, also in 2 weights plus open variants.

Lettergraphics showed a very similar or identical in an ad in Print in 1966 (without name). It’s listed in their 1968 catalog as Holiday, with biform alternates.

Pink Mouse is a digital interpretation and used for the sample, despite minor differences.

Caruso Roxy in use

The Spy in the Ointment by Donald E. Westlake (Lancer Books)1966 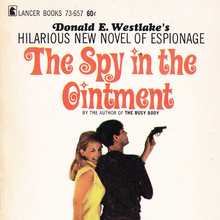