Jonas Hecksher’s distinctive slab serif forms a solid base from which the Royal Danish Theater can play. 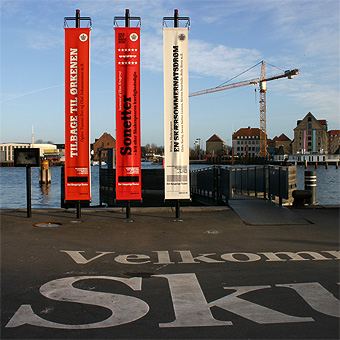 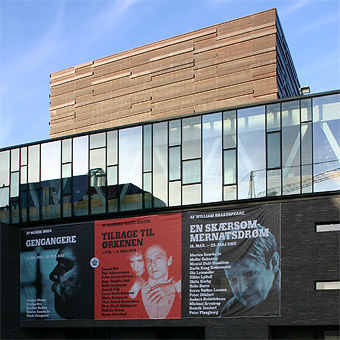 On a recent trip to Copenhagen, I was pleasantly surprised with the overall high quality of the typography in the city. One thing that particularly caught my eye were the banners at the Royal Danish Playhouse. It bothered me that I couldn’t identify the typeface on it – a strong Egyptienne with some whimsical details. Intrigued, I entered the building with its prize-winning architecture and took a closer look at some of the theater’s printed matter: repertoire booklets, posters, magazines. It turned out that there is a whole family at play: the heavier weights have the vigor of a Clarendon, while the lighter styles are more demure. 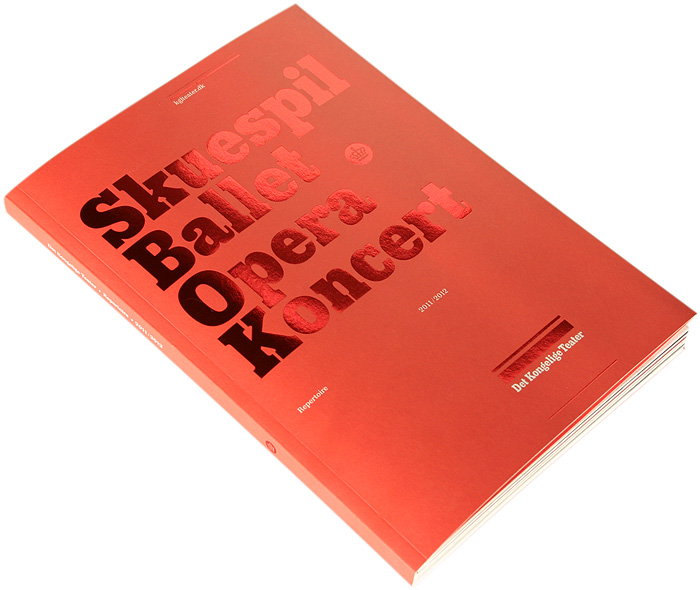 Back online, I found out that Det Kongelige Teater (“The Royal Danish Theater”) uses its own custom typeface – no wonder it didn’t ring a bell! It was designed by Jonas Hecksher and is simply named DKT. Hecksher is a partner and creative director at e-Types. This Copen­hagen-based design agency created the new visual identity for the theater in 2005. Hecksher says that he based his typeface design on an assessment of what the theater needed:

DKT references the classical Egyptienne typefaces and spans from dogmatic and loud to elegant and refined. In its expression it has a humane element: details are slightly tilted, or off – creating personality, warmth and humour. By virtue of its different values, the typeface can span both very classical and very modern expressions. This way it captures the diversity of the theater’s art forms and activities.

In 2011, e-Types started their own foundry. Playtype offers more than 50 typeface families designed by Hecksher, alongside designs by his colleagues, including Jens Kajus, Henrik Kubel, and Scott Williams. The DKT typeface, however, can’t be licensed – it remains exclusive to the theater.

Especially the heavy weights show traits of chunky woodtype faces: the horizontally compact extenders of ‘f’ and ‘j’ are shaped as if kerning still was a physical impossibility. The squared-off loop of the ‘g’ is also reminiscent of the limitations of vintage technology.

The DKT family comprises 4 weights; Light, Regular, Bold, and Heavy. The Light has no italic companion. Only the Bold is equipped with small caps. All in all, there are 8 fonts. To some extent, this range is employed in a very systematic way. Order and hierarchy are established with the aid of weights and sizes. 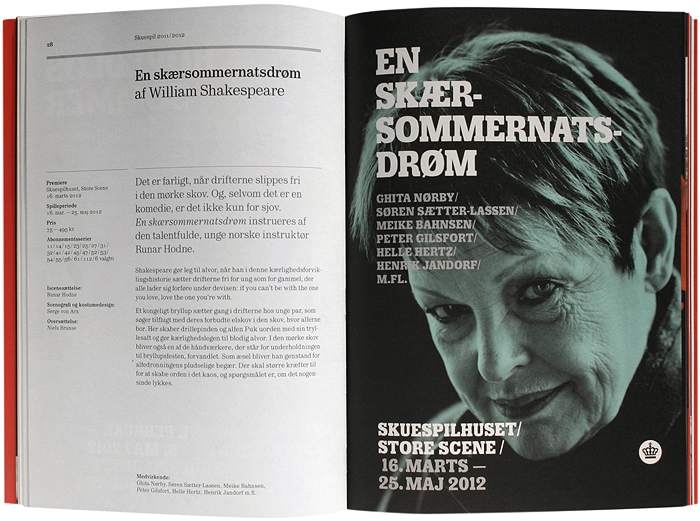 The layout of the repertoire booklet follows a clear structure: On the recto, an intense photographic image and a poster-style typography attract the reader’s attention. The verso invites reading, with a thoroughly composed abstract next to a marginal column that holds all the relevant information on the play. 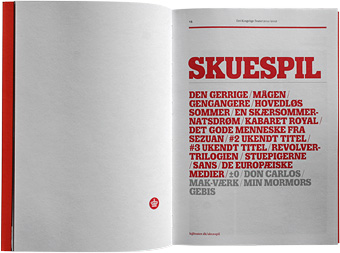 The sections – Ballet, Opera, Drama, and Concert – each start with a title spread that celebrates the beauty of large all-caps. On the opposite page, the stylized royal crown, another central element of the visual identity, balances the spread. Click to enlarge. 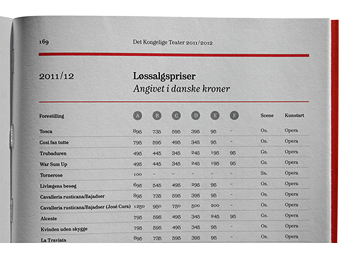 While the Heavy sports lining figures, the other styles are used with ranging figures. This is a reasonable choice for most cases, but it is not ideal for tabular settings. In this price list, the numbers look fidgety, also is the spacing of the figure ‘1’ too loose. Click to enlarge. 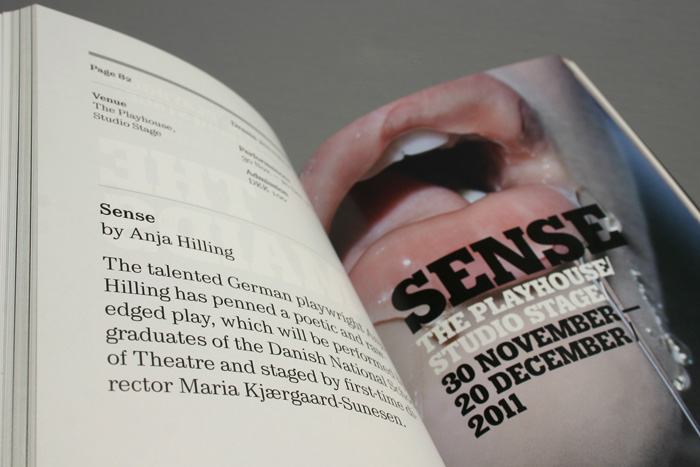 The English edition of the program is smaller and narrower. Unlike its Danish counterpart, it is printed on glossy paper.

DKT is not just a nice typeface, it is also used in very creative and often downright playful ways. This is something where many institutions fail: they adhere too closely to the guidelines of a once established corporate design. What initially looks cool and powerful soon appears repetitive and stale. Not so with the Det Kongelige Teater. Their graphic design succeeds in keeping the palette fresh. It is done by an in-house team featuring Søren Ajspur and Jesper Gregers Larsen. 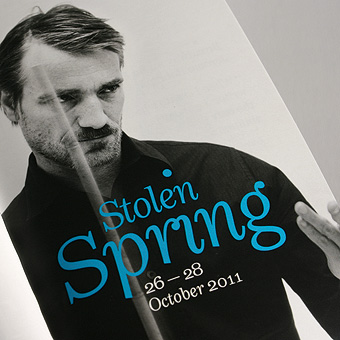 The letters ‘r’ and ‘i’ were kerned tightly to form a tendril-like ligature. Furthermore, the dot of the ‘i’ was shifted to the top. This way, the two lines of the title can be set tighter – and “Spring” literally looks springy. 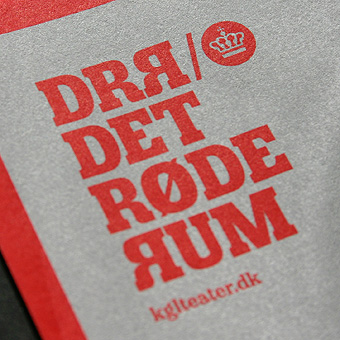 Danish spelling needs a few special characters like the “slashed O” (‘Ø’), but the mirrored ‘R’ is not one of them. Rather, it is the hallmark character of Det Røde Rum (“The Red Room”), a special series within the theater’s program. 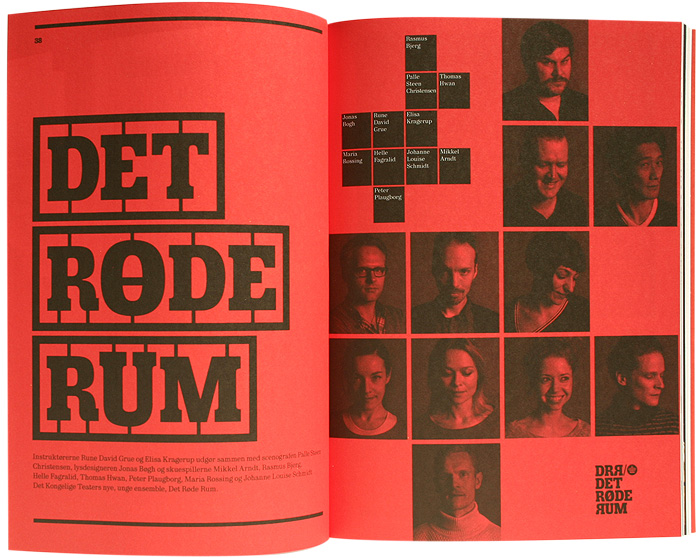 The custom typeface is not considered sacrosanct. Its letters are staged in ever new ways. Here they are shown framed with bridges, as if they were detachable parts of a model set. Single letters are enlarged, and the ‘Ø’ was modified to a more fitting form with a horizontal bar. 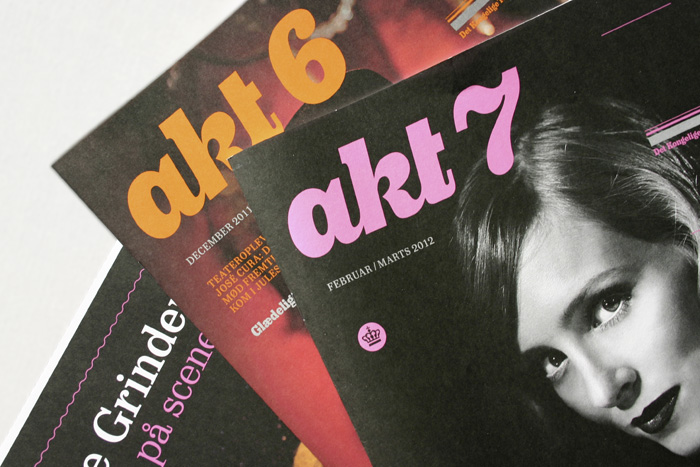 The theater publishes a bi-monthly magazine named akt. For the logo, the three letters were slightly altered so that they look like taken from a script typeface. With its upstrokes, the Heavy Italic connects almost naturally anyway. 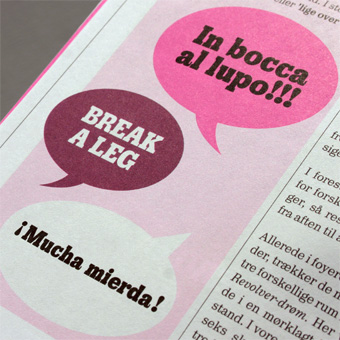 People within the theater world avoid to wish good luck, out of superstition. Three of the idioms that are used instead are presented in speech balloons. 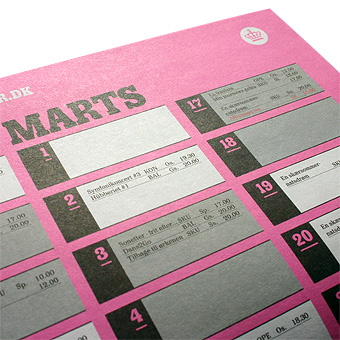 All dates are arranged in a box grid calendar on a pink double-page spread. 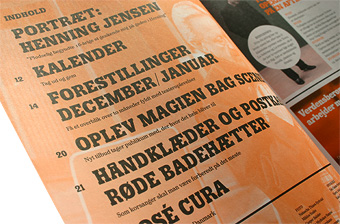 The magazine index has black type on a monochrome photograph. 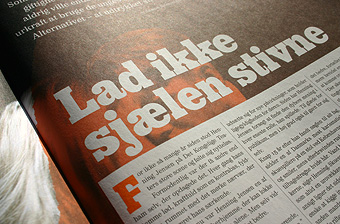 A feature opens with a headline in reversed white followed by a bright orange drop cap. 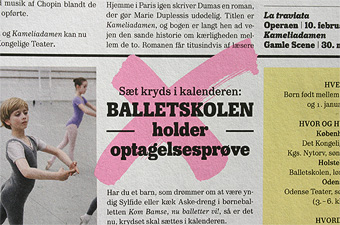 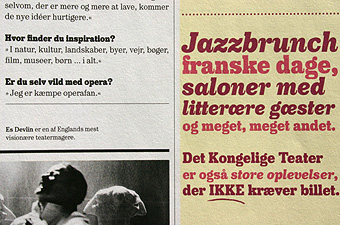 The typographers employ the full gamut of options: centered headlines take turns with justified columns and sections that are set flush-left. All-caps are mixed with common casing, colored blocks with black-and-white lines, italics with upright styles. Still, it never gets to the point of feeling chaotic or overcrowded. As everything is kept within the family, all elements fall into place. It pays off to start from a solid base.

Standing in front of the Royal Danish Playhouse, one has a good view on the Copenhagen Opera House across the water. Both buildings were erected only recently and belong to Det Kongelige Teater. I look forward to returning to this place.