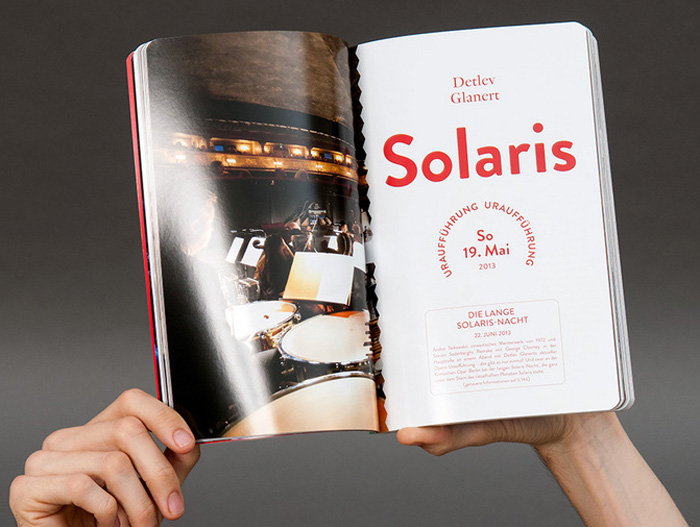 “Colorful! Sexy! Funny!” Guided by these keywords, Blotto Design has developed a new visual identity for the Komische Oper, the cheeky Berlin opera house. The typographic main actor is Brandon Grotesque (2010), a fresh and unpretentious geometric sans by Hannes von Döhren. Blotto put it on stage together with Genath. What looks like a peculiar display cut of a Fleischmann at first is actually “a free interpretation of a baroque type based on a 1720 specimen likely showing Johann Wilhelm Haas first design for the Genath Foundry in Basle, Switzerland”, designed by François Rappo and published in 2011 with Optimo. 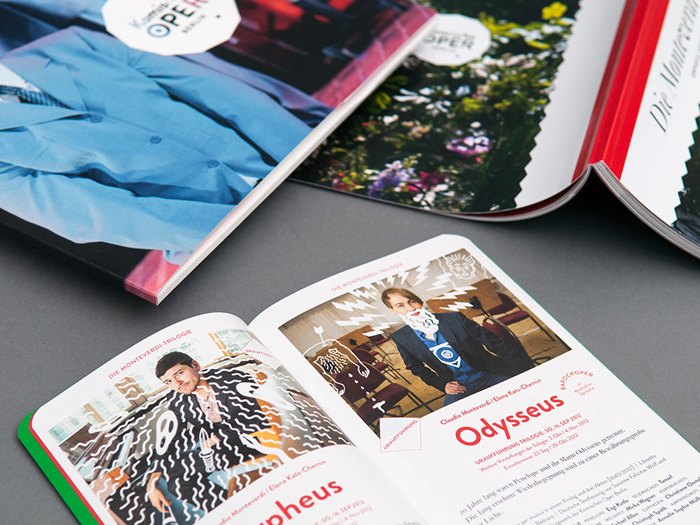 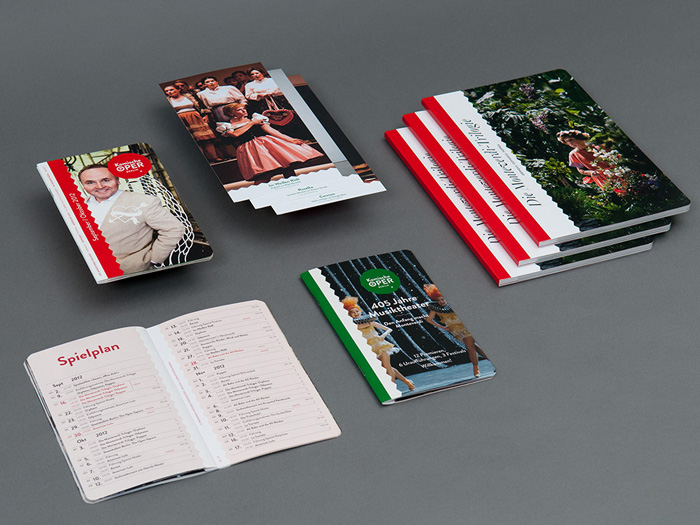 The various stationery items, flyers and brochures are united by the use of three bright colors, a curtain-like zig-zag border – and the two corporate typefaces, of course. 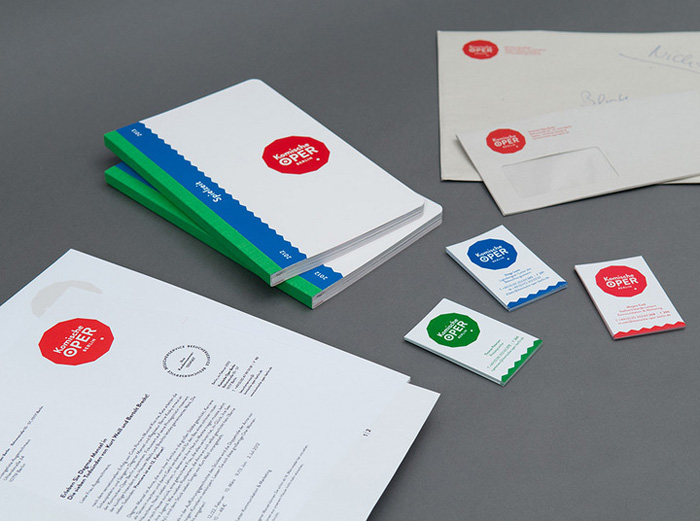 Ian Warner of Blotto Design shares some insight in the criteria determining the typeface selection:

We decided on using Brandon Grotesque at a very early point in the development. It was a fit from the start, because the new identity was supposed to be rather an evolution than a revolution: Brandon’s underlying geometry shares a lot with Futura, which is the typeface that was used before. Furthermore, Brandon is inspired by magazine designs of the 1920s and 1930s, a defining period both for the Metropol-Theater (as the Komische Oper was known back then), and the self-image of the house. The font family is also very well equipped, spanning 12 styles and supporting Turkish as well as Central and Eastern European languages. Latter is crucial in the communication of the opera house. 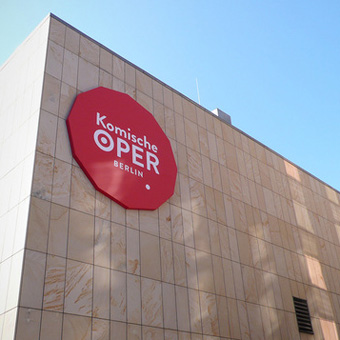 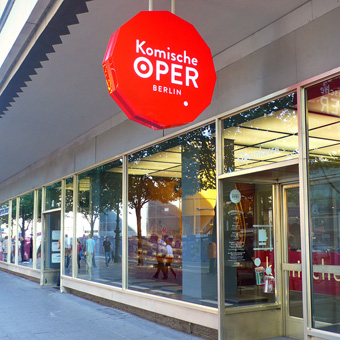 The logo, a red dodecagon with white type on it, marks the building on Behrenstraße/‌Glinkastraße. With an extra dot in its counter, the round O of Brandon Grotesque looks like a target or a geographical marker. Another off-center dot breaks up the symmetry. 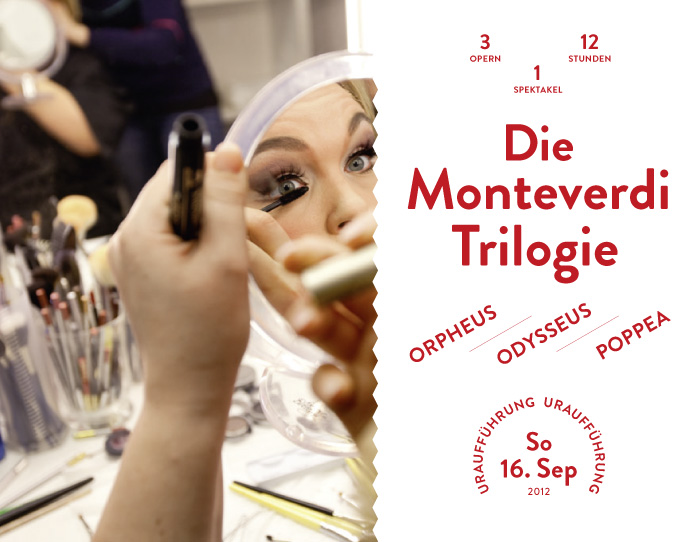 Two spreads from the programme for the current season exemplify the richness of the typographic application: There are numbers arranged in a triangle, big centered type, titles in all-caps on an angle, and words on an arc. Blotto demonstrates how variegated a page can look like, even when only one typeface and one color is used. 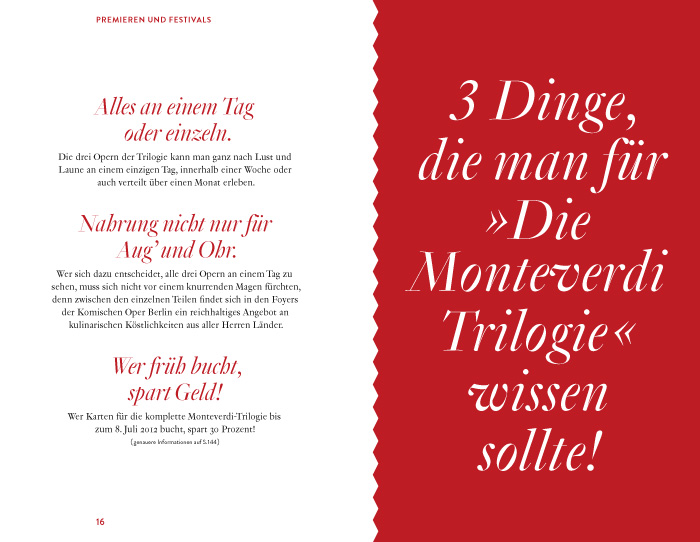 Genath came in later. We wanted to work with fresh, new fonts. In the end, Genath won us over with its strange hybridity in the details: The display cut is full of character and has the thin serifs and high contrast of a Didone, while the other styles combine the sweeping forms of a Transitional Serif with very fashionable and almost chunky serifs. At the same time the Regular is a true workhorse, easy to read and to use. That was a perfect match with the unconventional appearance of the Komische Oper: cocktail dress paired with hiking boots – everything’s possible.

As Genath’s contrast is a little too delicate to render well on screen, it is replaced with the less swank Droid Sans as Brandon’s sidekick for the website.

Three weights of Brandon Grotesque are used as webfonts, mainly for headlines and rubrics. As the designers didn’t want to dispense with the element of letters arranged on an arc, and as CSS browser support is still not good enough to do that with live text, these kinds of headings are rendered as images. It only shows when zooming in, though: Fonts stay crisp, pixel images become blurry. 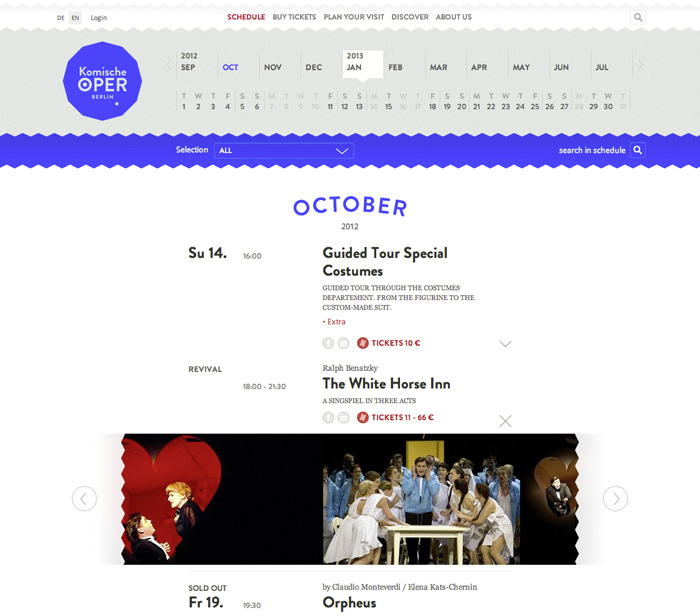 Brandon Grotesque popped up here before, in an article about the Comedy Central rebrand, which leaves me wondering if there is something inherently comical about its curves. Anyway, Brandon and Genath are excellent typefaces, both highly serviceable and, especially the latter, hardly used. Give it up for Blotto Design, their sagacious font choices, and an overall successful new identity for the Komische Oper!

More Brandon Grotesque in use