Some newspapers look for design to be lifeboat, but it obviously doesn’t prevent them from sinking.

Last week German newspaper Frankfurter Rundschau had to declare itself insolvent. It’s not a small local paper as the name might suggest but a nationwide one with a long tradition, and for many the message did not come as a total surprise. There were rumors that “the FR” as we call it, was in trouble for a while already.

I like this paper a lot, especially after its thorough redesign by TiedgeDulfaqar in 2007. Almost two years ago I wrote a post for this blog about it, but never published it because my photos were so poor. Of course I didn’t get around to make better ones. Now facing the potential end of my favorite newspaper, I’ll post it anyway. For those who don’t want to read it all but rather discuss the current state of newspapers, please jump to the end of the article. 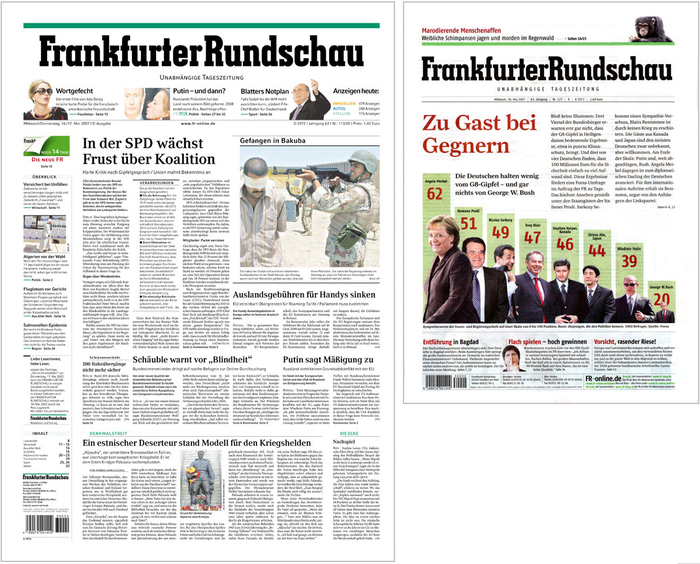 In 2007, the masses were in uproar and I was also skeptical when Frankfurter Rundschau was the first nationwide German newspaper to change its format from traditional broadsheet to the half as big tabloid format. This was introduced in the course of a major redesign and restructuring, and those are always difficult to get regular readers to approve. All changes, how tiny and for the good they might be, are a bad thing for the inured eye. Hardly anyone spoke about the excellent, improved typography and the clear, unraveled layout. Most concerns heard were about the newspaper not to be taken seriously anymore in the smaller format, with rich use of photos, graphics and four-color printing throughout. Is this correlation still true — the bigger the format the more respectable the newspaper?

Coincidentally I started traveling a lot around the time of the redesign and I learned to really love the smaller format, the shorter articles, distributed over five narrow columns, with cross headings easy to grasp, quotes and graphics breaking up the gray. This all sped up the process of quickly informing myself. I guess very few read every article in a paper word for word. We rather scan a whole spread, look at pictures, read headlines and captions, check info boxes and tables. Of course, a newspaper should still be something you choose based on quality of content and journalism (Frankfurter Rundschau is said to be liberal as opposed to its more conservative local counterpart Frankfurter Allgemeine). But I can’t negate being a visual designer. So here, I admit it, I read Frankfurter Rundschau because of Farnham. 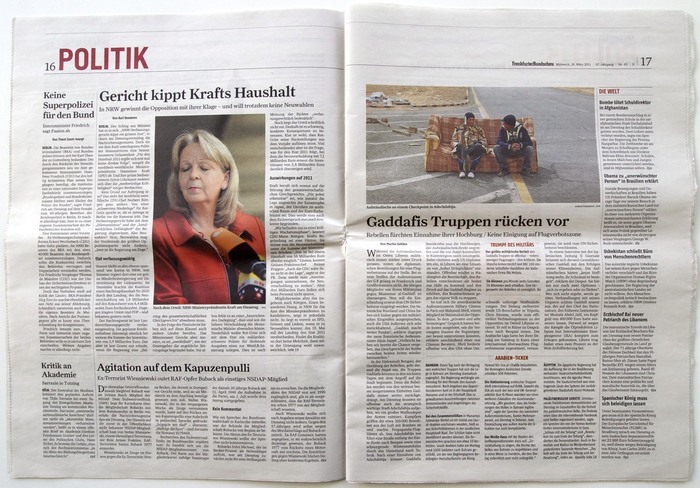 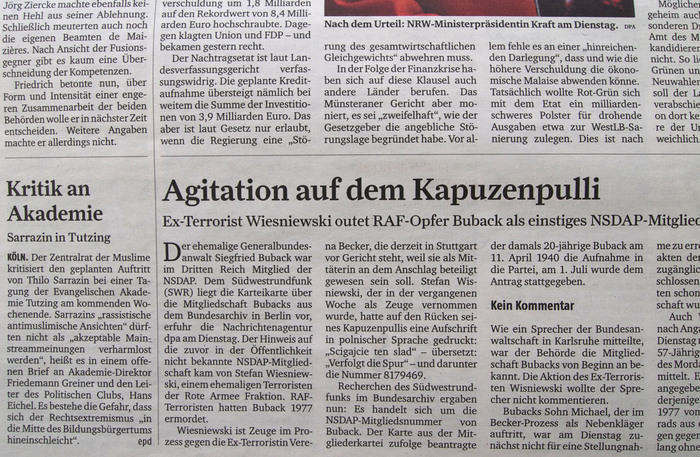 Designed by Christian Schwartz and published in 2004, Farnham is a Rational typeface based on the work of German-born punch-cutter Johann Fleischmann. It combines open, legible forms with peppy sharp details and some compelling ball terminals. Generous notches where straight lines meet curves are supposed to act as ink-traps in small sizes but become striking in headlines, which shape a newspaper’s face most considerably. Although the family consists of 25 fonts, including very readable text styles, only the Display variants are used for headlines, subheads and occasional quotes — the Bold, Regular and Light for news, and the Italics for the op-eds and opinion pages. (The typeface plays an even more prominent role in the iPad edition of the paper.)

All body copy is set in Charter, a highly legible family designed in 1987 by Matthew Carter for low-resolution output and other demanding printing conditions. It is less refined than Farnham but partners well with the headline face since both have square serifs and share the same general proportions and form model. 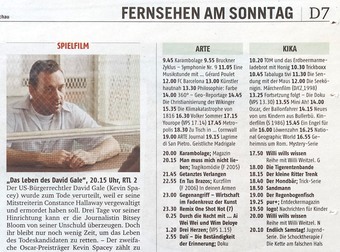 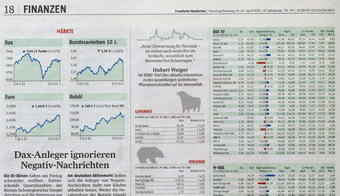 As a third counterpoise to the two serifs FF Fago is used for less formal, but “gripping” headlines in the sports and magazine section, but also for shorter reports, deck, boxes and side notes. The calm, economical humanist sans by Ole Schäfer from 2000 is a good pick for newsprint and small sizes. I once set a book in Fago and was not happy with the outcome. It is almost too loosely spaced and narrow for sharp offset printing in regular reading sizes. Here though, even the dense TV guide, stock prices and compact, all-caps headlines stay legible. The typeface’s open, regular forms are a good compromise between “stiff” and “informal” and complement the more serious, newspaper-ish style of Farnham and Charter well. All three together make for a contemporary and elegant look of the paper. 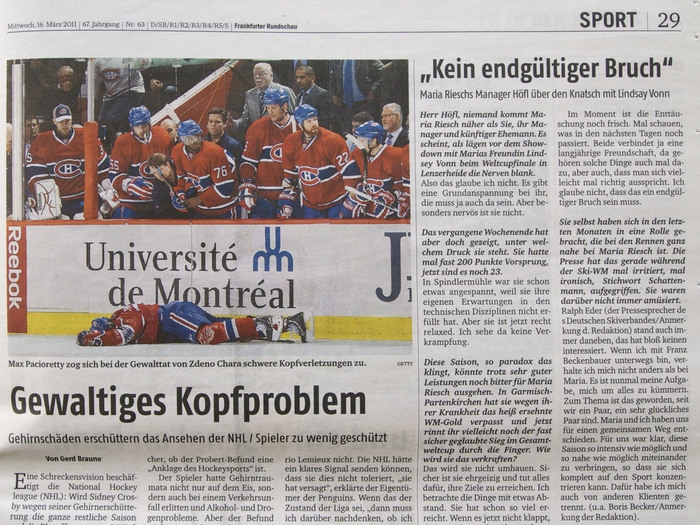 To conclude a note on the very top of the newspaper: the masthead. Unchanged for years, it remains set in an iconic customized version of Memphis Bold Condensed, for which there’s no digital retail font available. The closest alternative is Karnak Condensed Black, the analogue design by Ludlow.

Back to today and the sad news. Being the target group for this paper — the “young, female”, educated, flexible, independent, globally thinking, liberal academics — I have to ask myself why I let it die. I could afford a subscription of the print edition but have none (I’m hardly at home). I could buy single issues at the newsstand but don’t (I hardly get to newsstands). I’m online and read from screens almost all the time, but only bought their iPad edition twice (it’s really good, I wrote a post about it too). It’s not Frankfurter Rundschau’s fault, I don’t read any printed newspaper anymore. The only thing that makes me feel a tiny bit less horrible about this is that I did not contribute the waste of an enormous amount of paper.

But many of us read more than ever before in our lives. So what do we read? For current information, I have to admit that websites, social media, and read-later services won me over. For all other content, I still love books.

What about you? When did you last buy a printed newspaper?

More Farnham in use