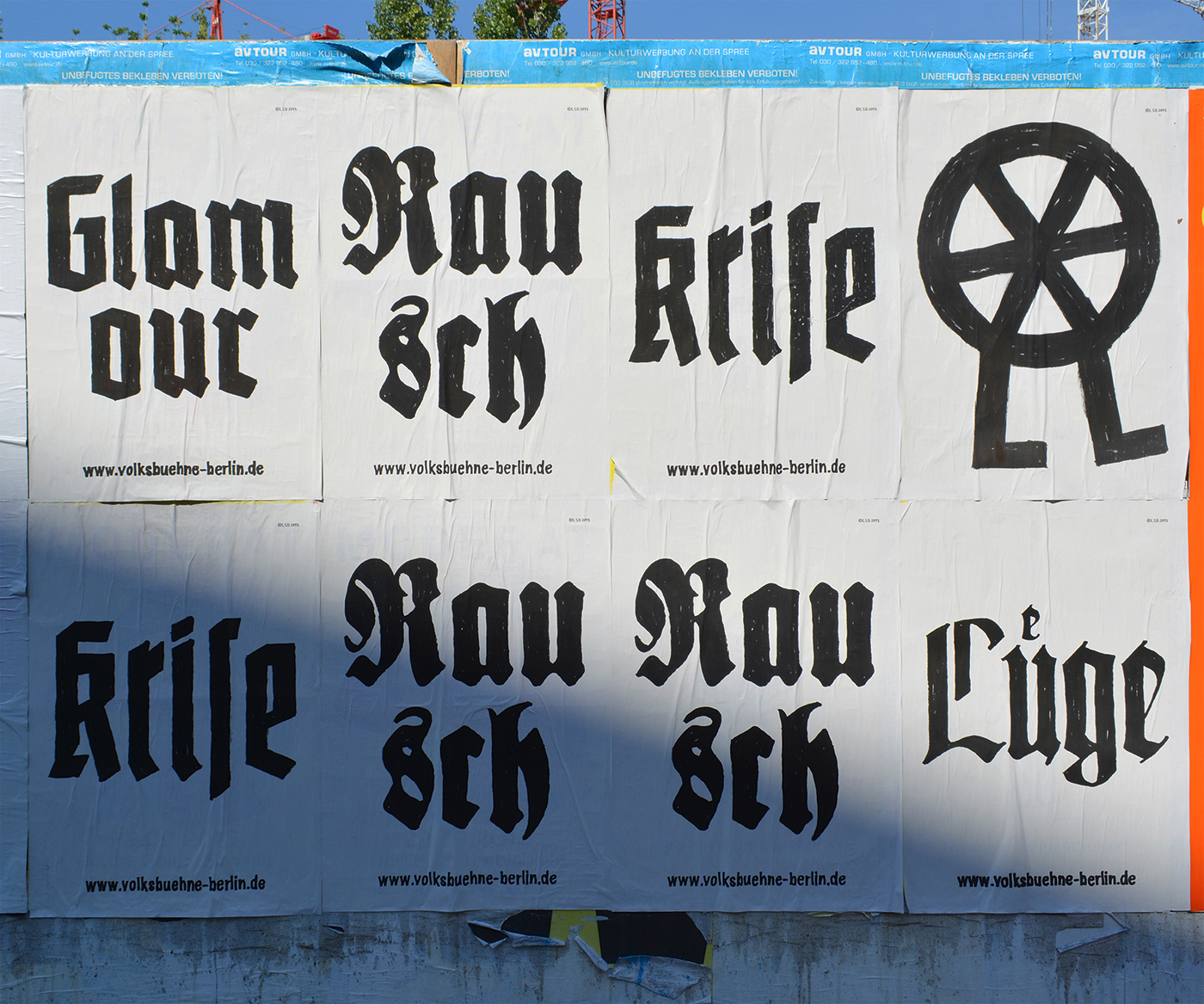 It is campaigning time in Germany. On Sunday, some sixty million voters are asked to cast their ballots in the federal election. The whole country is plastered with posters that show carefully arranged color photos of forced smiles. The capital is no exception. Berlin is full of friendly messages ranging between pleas for continuance on one side and calls for more solidarity on the other. Hardly any of the slogans is controversial. Not even typographically: they come in 99 shades of sans-serifs.

Into the thick of this distressingly uniform hunky-dory: purely typographic posters! In big and bigger letters. Black on white. No photos, just words. Disturbing words like Lüge (“lie”), Krise (“crisis”), Rausch (“frenzy”). They are rendered in blackletter, the most symbolically charged of all type genres. And not just any blackletter: it is a mix of bold, crude display styles, including so-called schaftstiefelgrotesks (“jackboot grotesks”) — typefaces that can easily be imagined on propaganda posters from 1930s Germany. Which lies, which crisis are they referring to? Who is behind this, a party from the far-right? Don’t be silly, those use generic neo-grotesques like everyone else. Even the Bavarian crypto-royalists stopped using blackletter some decades ago. The only halfway recent election material in broken script must have been the posters by frivolous anarcho-punk party APPD. 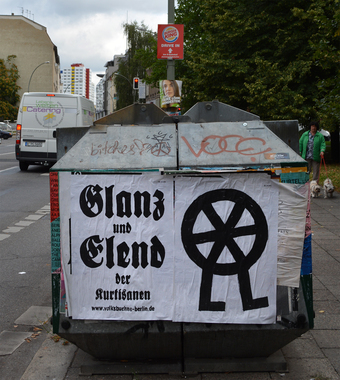 Burgers and candidates (top), Glanz und Elend (below). Latter is the German title of The Splendors and Miseries of Courtesans, the novel by Honoré de Balzac. 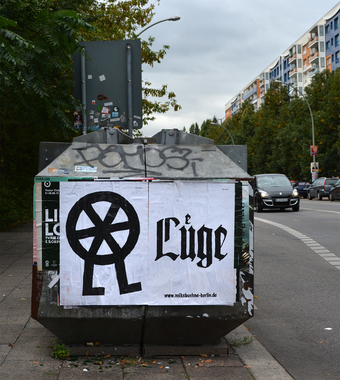 The walking wheel is not some politico-mythological symbol, but a medieval secret sign used by vagrants. It is said to denote “beware of a firestarter” and was introduced as the Volksbühne logo by Bert Neumann of LSD in the early 1990s.

No, this is not an electoral campaign. It’s the new poster series by the Volksbühne. Most Berliners will recognize the source by its iconic logo, the walking wheel. The “People’s Theater” was founded in the 1890s as a theater for and by the working class. Since Frank Castorf became artistic director in 1992, the Volksbühne established “a reputation as one of the most provocative and experimental major theaters in contemporary Germany.” As such, it is above suspicion of any kind of reactionism. So, why blackletter for the Volksbühne? I asked Leonard Neumann of Berlin design studio LSD about his motivation to employ this fascinating and tabooed genre.

For the new campaign, we had to answer two questions: How do we deal with the circumstance that the Volksbühne identity that we had invented in 1992 has been misunderstood and ruined by various agencies over the past five seasons? And how can we regain visibility within the city’s current poster landscape? The typefaces originally specified by us were “burnt”, hence we had to find a new typographic voice that is presently unused — at least unused within the theatrical context. There’s an interest in blackletter typefaces for some time now. Its Third Reich connotations, however, make it difficult to use without bias. 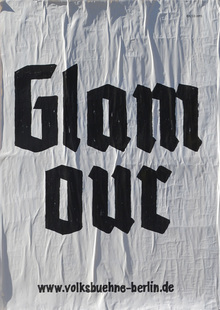 Of course, it is crucial which object is being advertised. The Volksbühne represents a concept of art that is committed rather to the ineffable, marginal, endangered, than to the unambiguously interpretable. The complicated situation in which blackletter type is stuck seemed to be an appropriate equivalent to what constitutes the Volksbühne.

A closer look reveals that the letters actually are not typeset, but coarsely drawn with a marker. Is this twist enough to shake off the ominousness, to distance oneself from an alleged “Nazi fetishism”?

Rendering the letterforms by hand takes away the finality of the printed word. More important is the choice of words, though: “frenzy” or “lie” are admissible — these terms are laden with negative connotations. “Truth” or “joy”, on the other hand, would not work. We deliberately went for contrast in the wording. We further aimed to revalue terms that, in our opinion, are negatively connoted for no good reason, like “crisis”. There is no art without crisis, as is generally known, isn’t it? 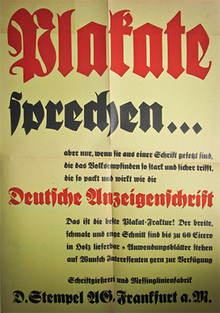 D. Stempel adopts a völkisch (populist) tone in this ad: “Posters communicate … but only when they use type that meets the (German) people’s sentiment as strongly and confidently … as Deutsche Anzeigen­schrift does.”

The posters are eye-catchers for sure. In this regard, the campaign brilliantly meets its goal. So, is blackletter okay to use again? Is the Nazi association a pedantic kneejerk reaction? Is there such a thing as a fascist font? At least some letterforms have an unambiguous background and are intrinsically tied to National Socialism in the collective visual memory. I won’t go into the details here, but if you want to delve into the convoluted relationship of blackletter and nationalism, I recommend Blackletter: Type and National Identity by Paul Shaw and Peter Bain, and Die Fraktur und der Nationalismus, an online article by Hans Peter Willberg. 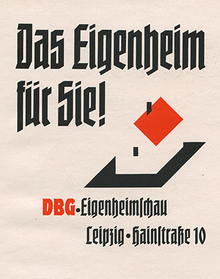 “The homestead for you!” — fake in-use sample for Nürnberg from a 1930s specimen. The Volksbühne dresses itself in a typeface that once was imagined in a very different context. Image courtesy of Lars Schwarz

Let’s examine the typefaces in use. “Rausch” is in Rudolf Koch’s Deutsche Anzeigen­schrift (1923/1934). Koch, the devoted Christian, died too early to be roped in by the Nazis. His typefaces including Wallau and Jessenschrift were among the most popular in the period, though. There is Potsdam (“Glamour”), released in 1934, one year after the Machtergreifung. Together with Element or National, it is one of the most notorious examples for the simplified constructed gotisch that has been nicknamed the “jackboot grotesk” for its perceived soldierly look. In all likelihood, it is named after the symbolic “Day of Potsdam” the year before. The condensed style used for “Krise” is Nürnberg. This typeface is an interesting case: it was originally designed by Kurt Liebing as Liebingschrift in 1912, which makes it one of the earliest attempts at modernizing blackletter. When this style — archaic “Germanness” updated to restrained modern forms — became in vogue, the Ludwig Wagner foundry seized the opportunity and re-released it in 1934. Now it was named Nürnberg — after the city that hosted the Nazi Party conventions, the Nuremberg rallies. Linotype Textur (“Lüge”) is the outlier. It is a medieval gotisch, created in 2002 by the late Roland Goulsbra. Goulsbra did not comment on his sources, but looking at the numerous weird glyphs like ‘k’, it is safe to say that this has more of an ahistorical fantasy farrago than a faithful revival. 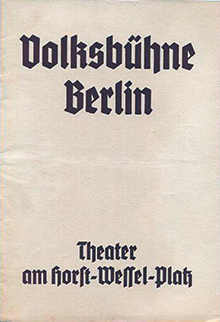 Not part of the new campaign: this Volksbühne program is from 1936. It is set in Tannenberg, another prime example of the schaftstiefelgrotesk. The theater’s address, Bülowplatz, had been renamed after Nazi “martyr” Horst Wessel in 1933. Today, the square is known as Rosa-Luxemburg-Platz.

So, what to make of this? I’m on the fence here. On one hand, I’m a sucker for blackletter type, and I love to see it in contemporary use. On the other, I wonder whether it was necessary to include Potsdam and Nürnberg in the mix. What’s in a name? Well, see above. Does the Volksbühne really want to put itself into this lineage? Why tie in with the aesthetics of the theater’s darkest years? If blackletter, why not something more recent like Kaas, Moyenage, Fakir, Rostrot, Brokenscript? There are countless unsuspicious typefaces that would fulfill the conditions of being attention-grabbing and unused in the theater world.

I guess I know the answers. One is: It wouldn’t matter, because laymen will peg just any blackletter as “Nazi type”, irregardless of its origin. How ironic. Make no mistake — LSD is very much aware of the status of blackletter as Nazi victim. Leonard Neumann:

We have provided the theater staff with background material on the ban of Fraktur in Nazi Germany from 1941 on. This way, the intended unsettledness [of the audience] may lead to obtaining an information that actually is not one-dimensional. The true reason for banning blackletter and defaming it as “Jewish” was the fact that it was considered illegible outside of Germany, and hence was in the way to ​​world domination somehow. It’s a good example for how propaganda works.

The other answer is: Volksbühne doesn’t have to be “tasteful”, let alone politically correct. They want to provoke. And they come off best by choosing the most extreme option — not Bastard, but “the real thing”. I find this kind of provocation a little superficial and maybe too easy, but its effectiveness is hard to deny. I’ll give them that: The Volksbühne is likely the only institution that gets away with bringing Potsdam and Nürnberg back to the streets of Berlin. 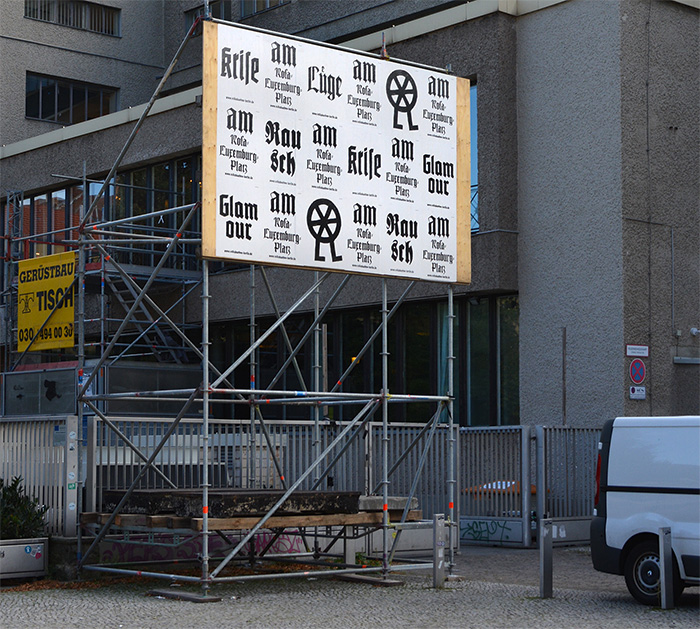 There is one technical detail that irks me: The rules for “long s” (ſ) have been ignored. It should read Rauſch, not Rausch etc. (More on this in a follow-up about the Volksbühne program.) What annoys me more, though, is the fact that blackletter is not used sincerely, but once more for its scandalizing effect. A dilemma that is hard to solve, I know.

… because of black letter’s continuing usage precisely for its negative associations, it will continually accumulate dark vibes. — Miles Newlyn 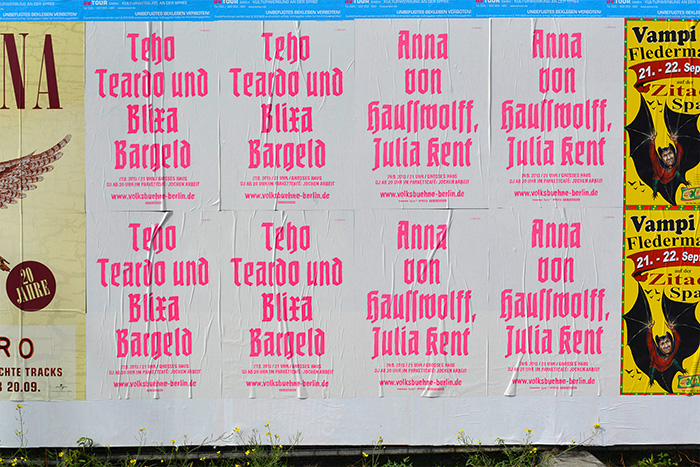 The most recently added posters are no longer in black, but in pink. Type folks like us often forget about this, but color can make quite a difference!

Addendum: After I finished this article, I found out that blackletter is used not just for posters, but for all of the new visual identity, starring an even wider palette of typefaces. In fact, there isn’t just four or five corporate typefaces, but a whole corporate type genre: Volksbühne is blackletter. Blackletter is Volksbühne. I will add more pictures soon.

More Potsdam in use