Smart, kinetic type stimulates visitors while it thanks donors. 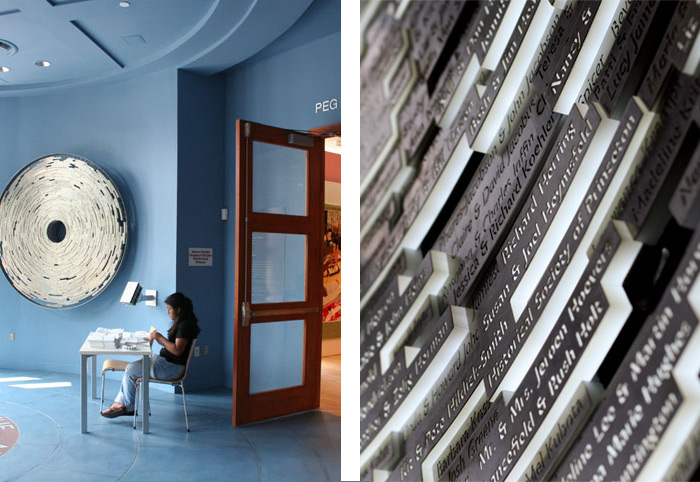 Most museums or non-profit institutions have some sort of wall for recognizing big donors. Most visitors briskly pass by the wall on their way to the real art. Things are different at the Arts Council of Princeton’s Paul Robeson Center for the Arts where sculptor Joshua Kirsch created an interactive a piece that stimulates visitors while it thanks those who helped make the institution possible.

Placed in the building’s rotunda/lobby is a motorized disk, on which are placed approximately 2000 names, loosely grouped by the first letter of the donor’s last name. Adjacent to the sculpture is a control panel with a button for each letter of the alphabet (excluding Q and X). When a viewer wants to find a particular name, he or she pushes the corresponding letter on the control panel. The disk rotates and stops at the requested letter and displays all the names corresponding to the requested letter by back-lighting them with white LEDs. 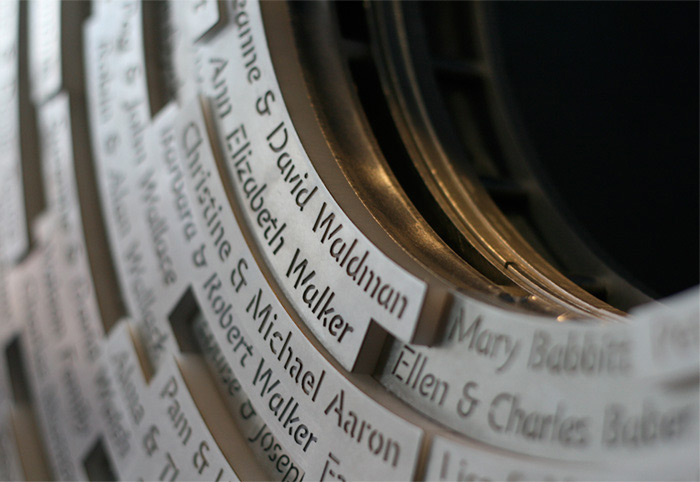 A digital schematic for the wheel shows the four styles of Jigsaw used: roman and cursive in two weights each.

Stenciled letters make sense for names which are laser cut in stainless steel. For these, Kirsch chose Jigsaw Stencil, designed by Johanna Biľak. Though stencil type is usually derived from decades-old industrial styles, I appreciate that the artist went with a modern-day typeface which better suits a contemporary institution in a brand new building. Fortunately, contemporary stencils are not as scarce as they used to be — see also Adam Cutted, FP Head Stencil, FF Signa Stencil (and Serif), and two seriffed stencil faces that take Renaissance forms and make them new: Typonine Stencil and Dala Floda.

I learned about the wheel on Metafilter where user Sys Rq calls the piece “a big ol’ Meh for everyone but the donors themselves” and “unnecessarily elaborate”. He may have a point about donor money being better spent elsewhere, but I’m not sure this wasn’t a worthy try. Donor walls are often dull (despite all the interesting things one can do with type), occupy too much space, and — as Sys Rq implies — hold no interest for anyone beyond the donors. This is none of those things. The Center addressed everything that’s wrong with a necessary evil and did it through a commissioned local artist to boot.

More Jigsaw in use