An Englishman in New York takes a walk to the library and stumbles on some peculiar plaques. 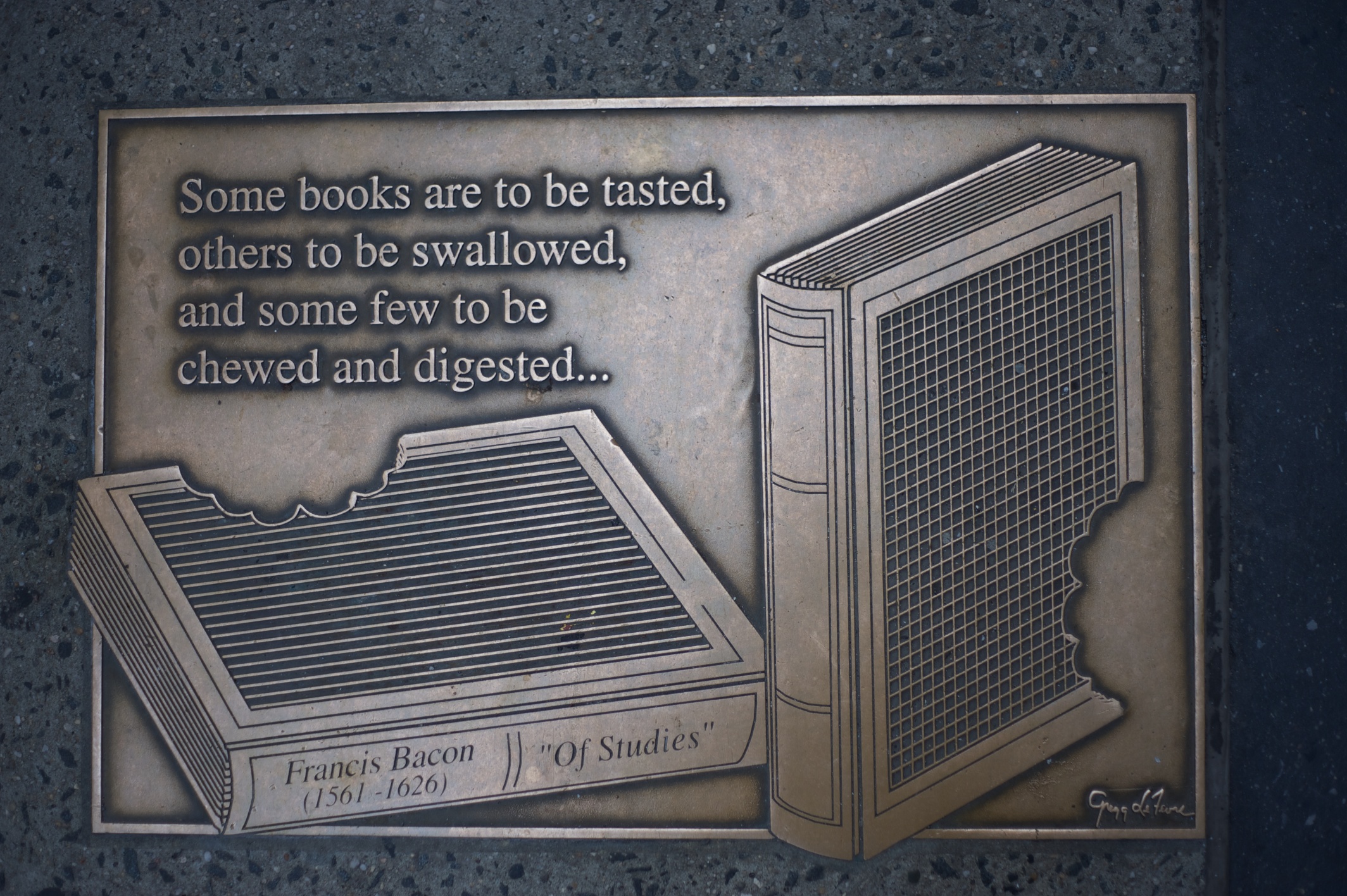 Library Way, sometimes called Library Walk, is a series of bronze panels, each featuring a literary quotation, laid into the pavement of E 41st St, Manhattan. This is the street that leads to the imposing front entrance of New York Public Library. The 96 panels are by Greenwich Village “urban sculptural artist”, Gregg LeFevre, and date from 1998.

The quotations themselves seem to have gone down well with the public and various critics, and I wouldn’t want to criticise the choices. Yet, while some of the graphical concepts in the panels are pretty good, indeed one could imagine these pieces as workable early drafts, they are almost all severely let down by poor execution. The typographic aspects in particular deserve stark criticism.

Here are seven that caught my eye last August:

Francis Bacon (top) — We’re off to a bad start with Times New Roman, not suitable for the 16th century, then we cringe at the fake perspective on the spine, with an actual typo in the spacing of the hyphen (which, incidentally, should have been a longer dash). Finally we come to the title of the book, inexplicably in quotation marks (predictably straight), and also italicized (unlike the author) which further confuses the 3D effect. Regarding the bite marks, one wonders if they are deliberately angled so as to avoid the need to draw them in three dimensions. 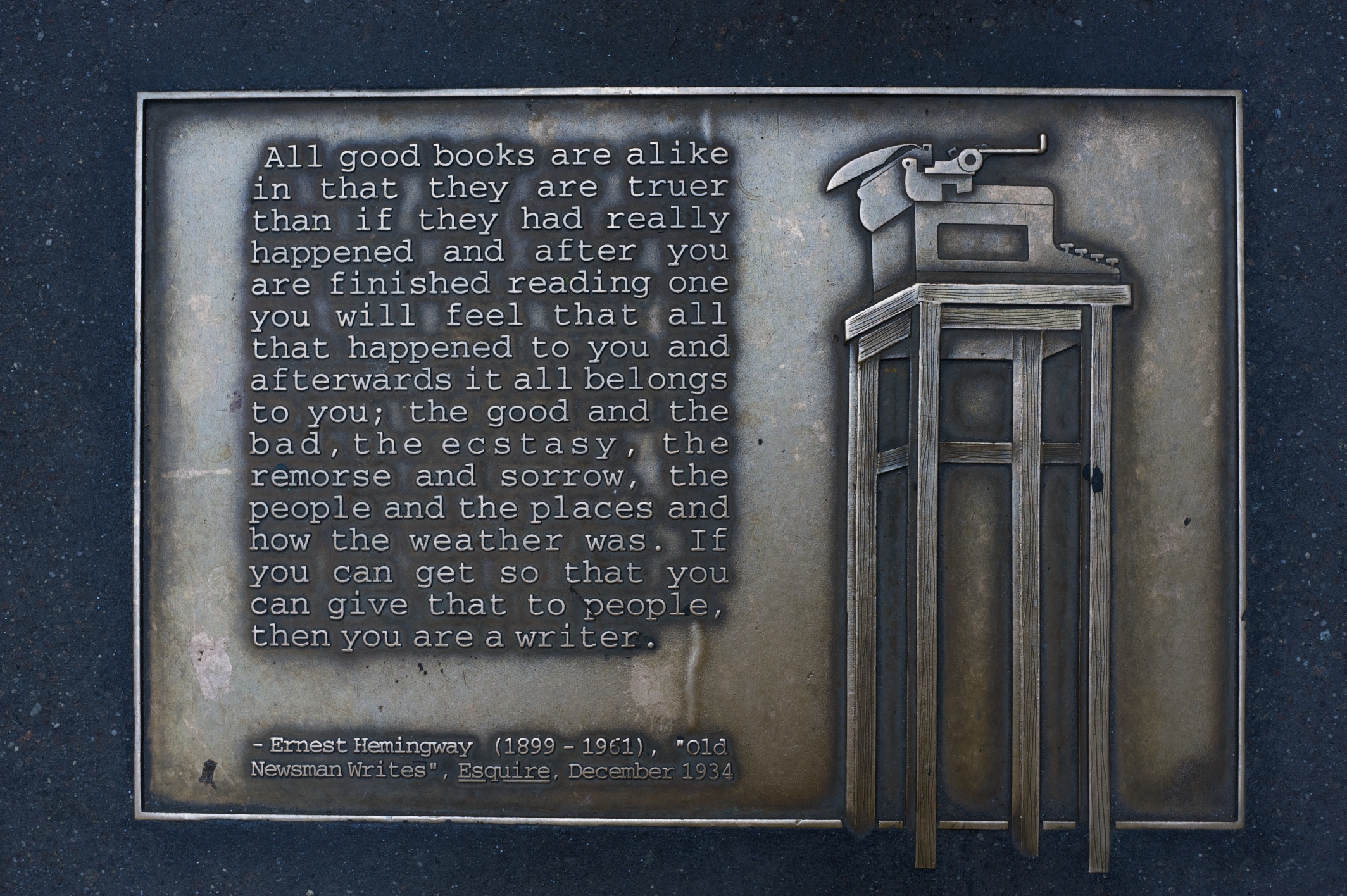 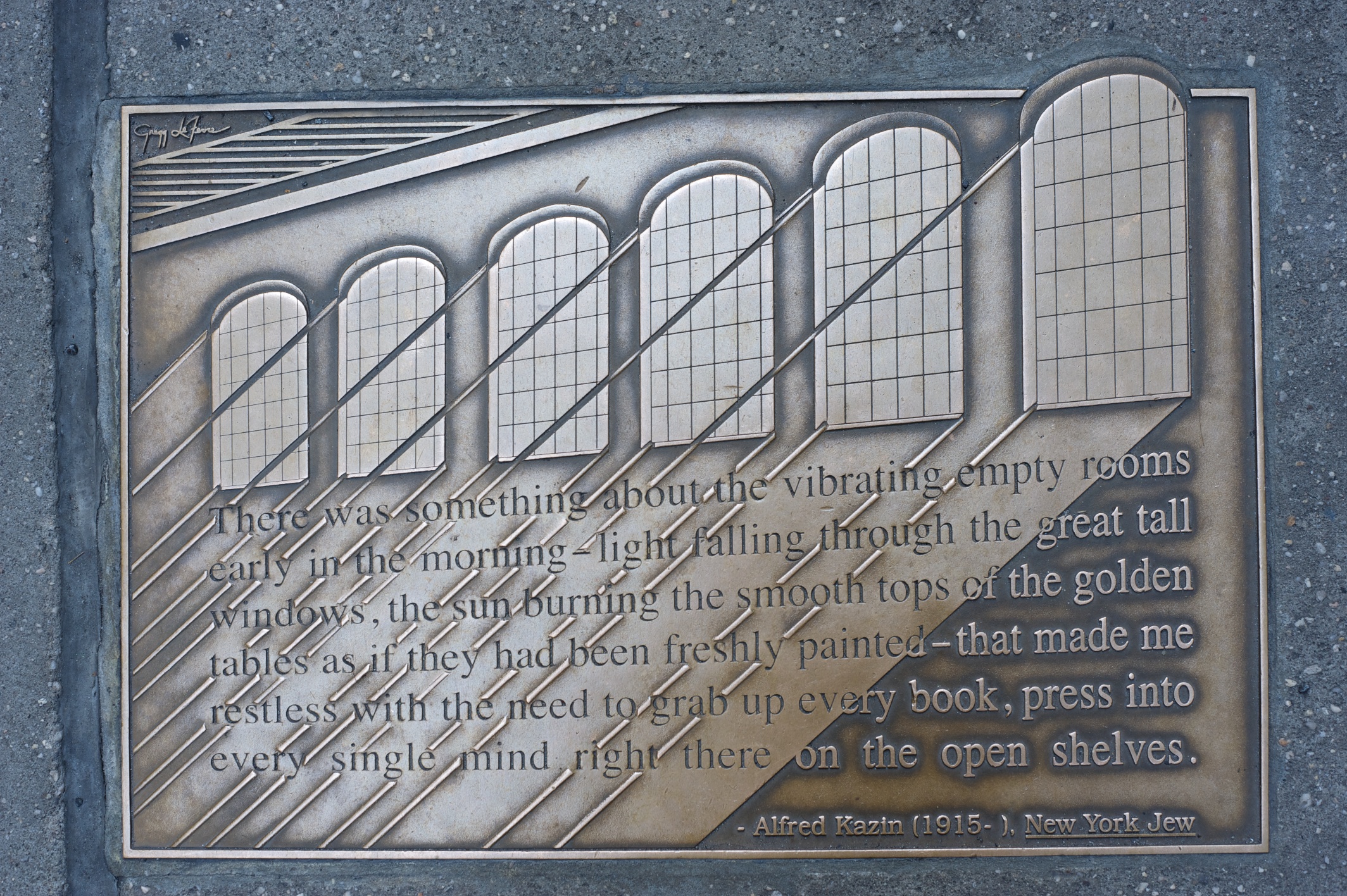 Alfred Kazin — The lighting effect is promising, but the perspective distorts the text in a strange way (notice how the “restless … into” line starts off with wide letters and ends slightly condensed), and why switch to another typeface for the credit? 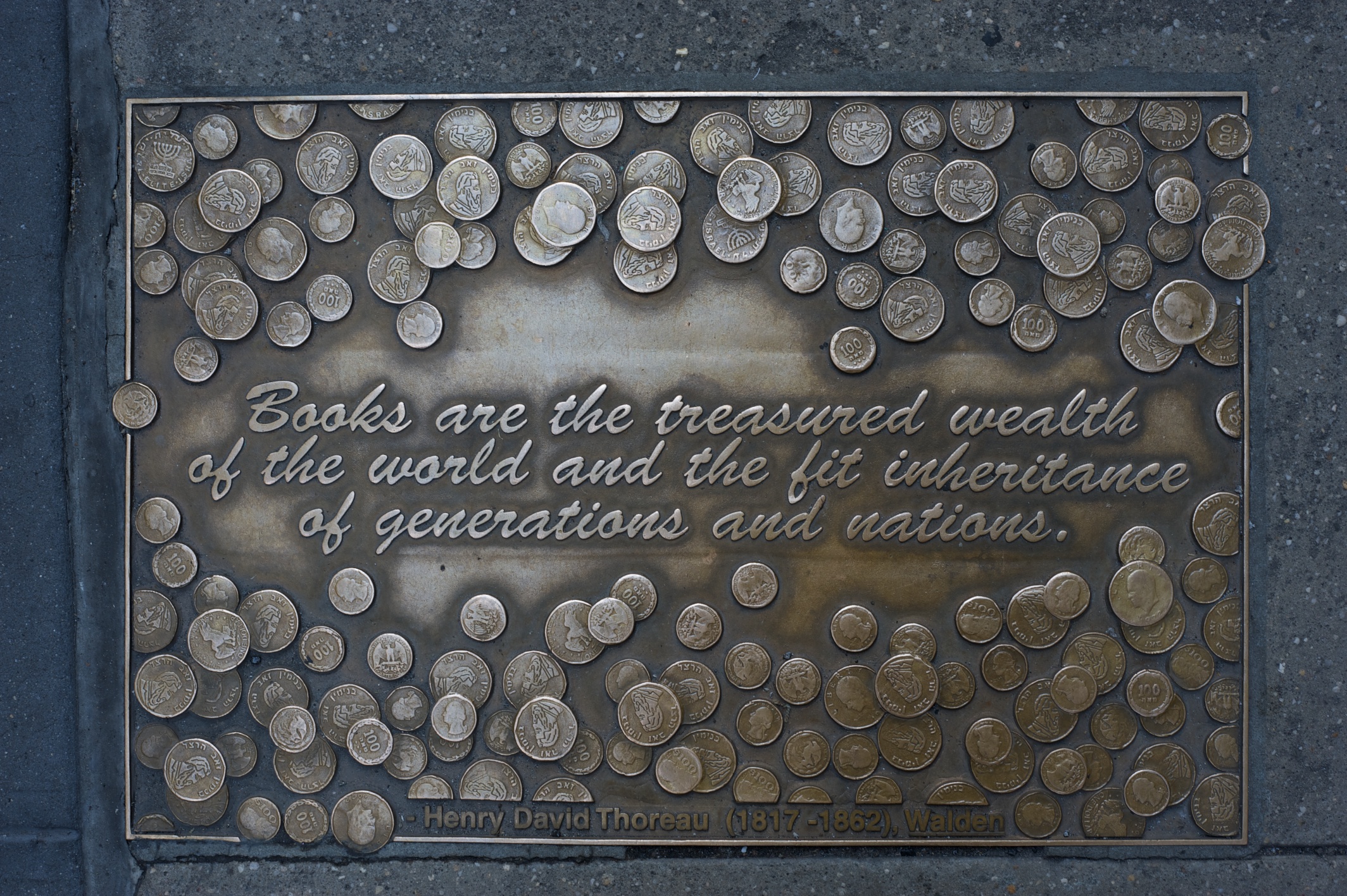 Henry David Thoreau — Brush Script and Helvetica, really? The coins are very effective in this piece, and I love how they breach the edge of the panel, but I question whether a few dozen coins on the ground successfully represents “the treasured wealth of the world”. 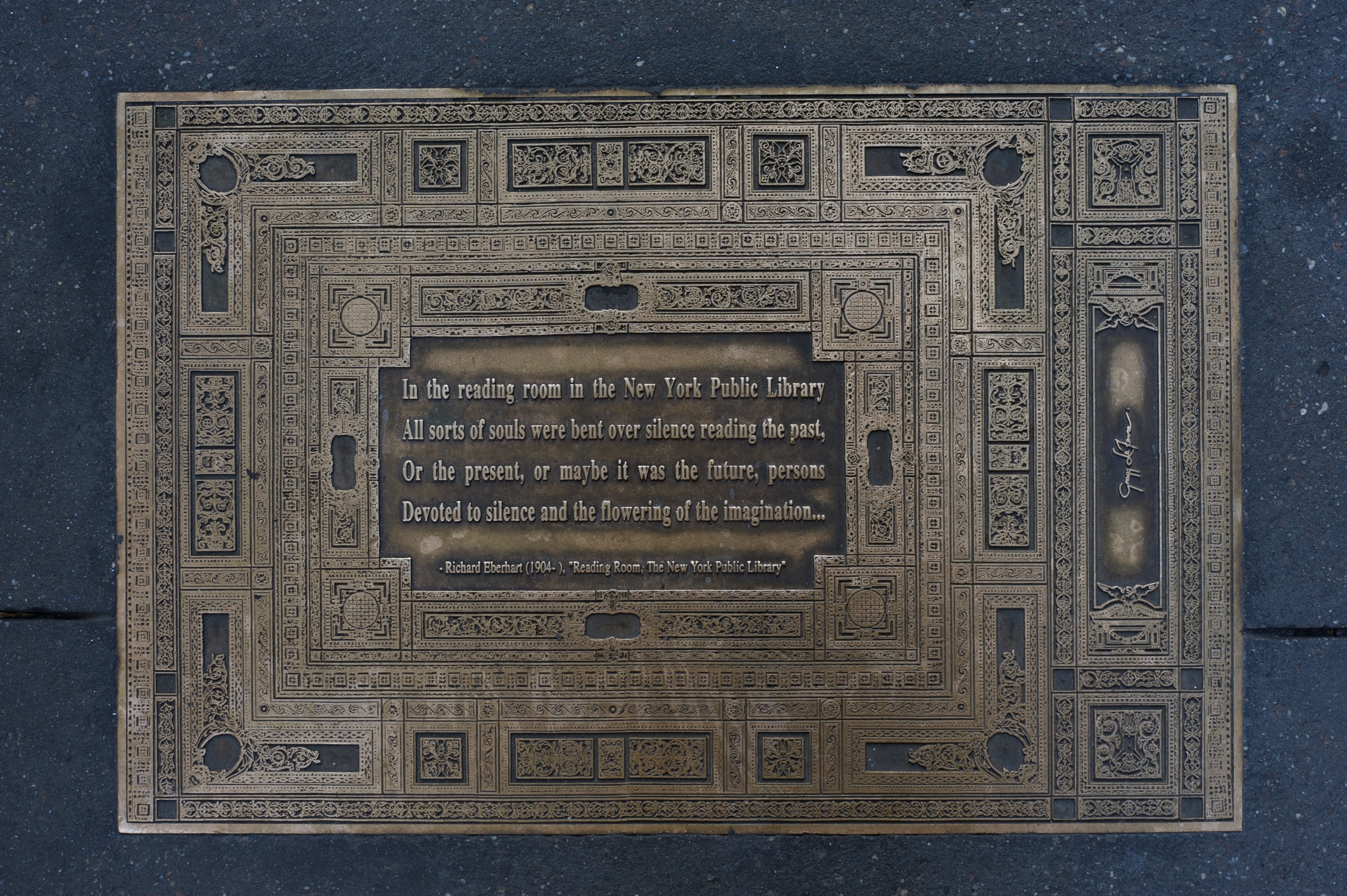 Richard Eberhart — What a shame to ruin a glorious ceiling with cheaply condensed Times! 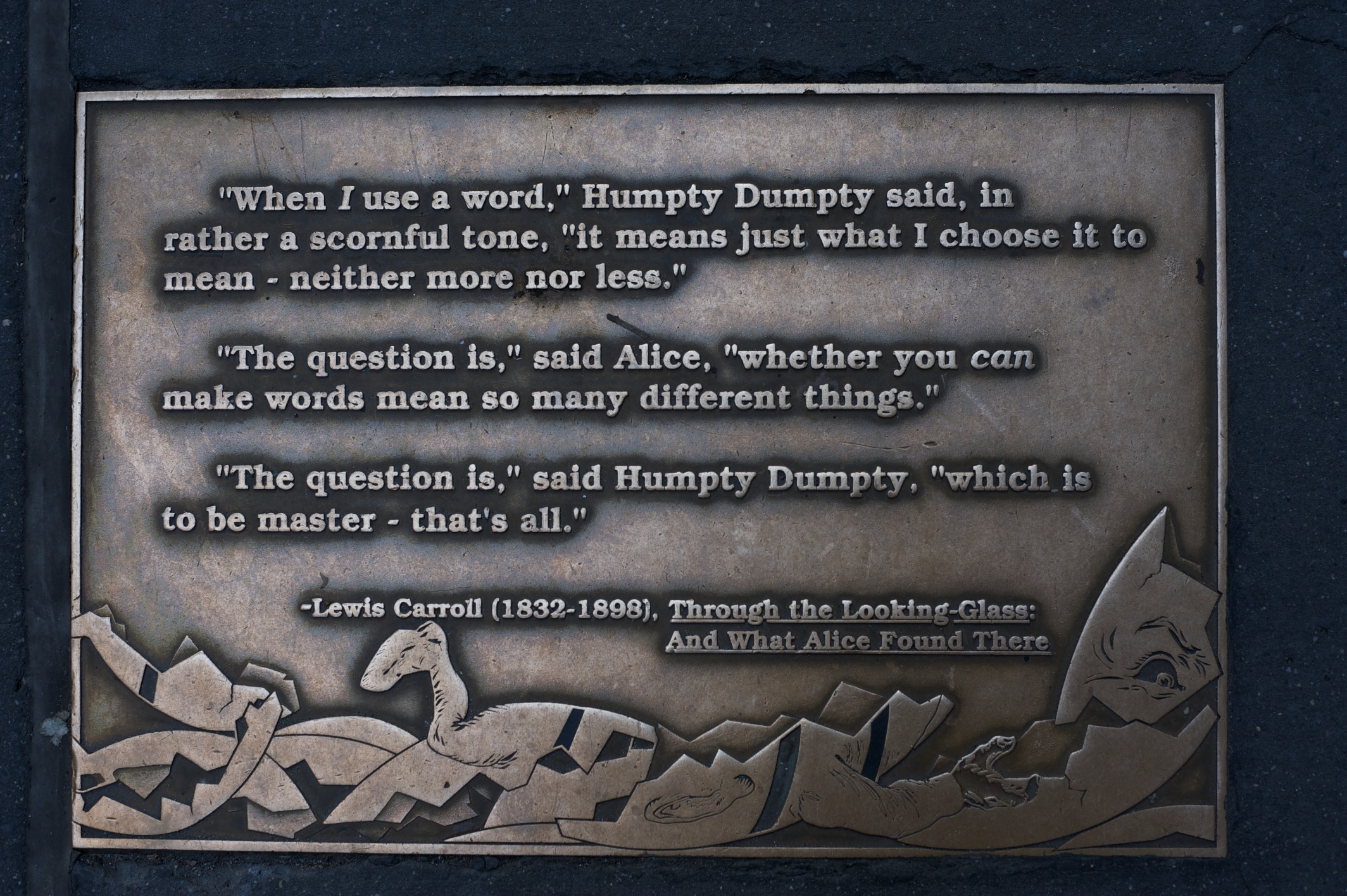 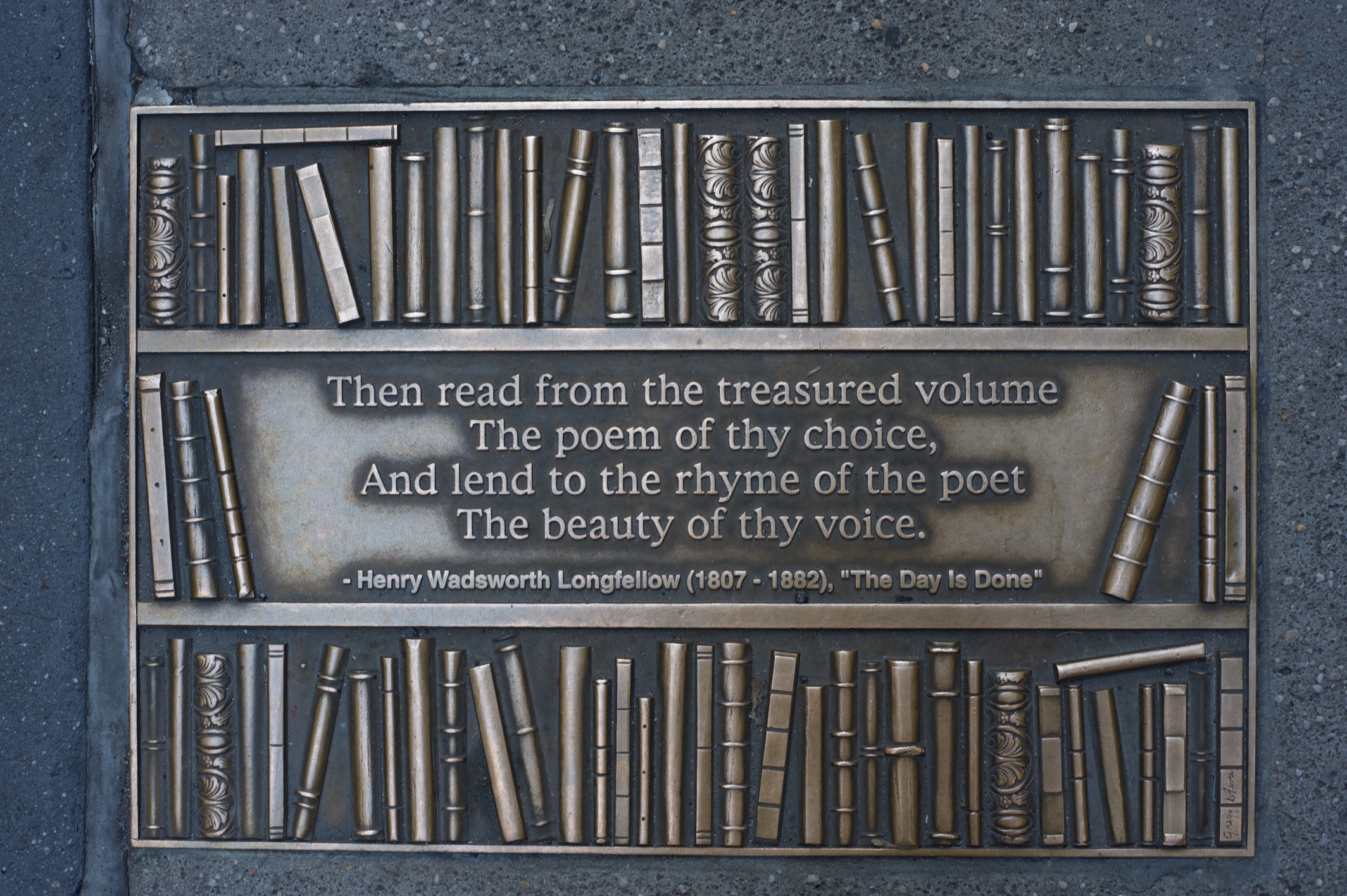 Henry Wadsworth Longfellow — Except for the small line in Helvetica, this is really rather nice; the irregular style and arrangement of the spines are very attractive.

The panel on José Martí, not seen by me last August, deserves particular censure not just for awful spacing, use of straight quotes, and terrible typeface choice for book spines (Chicago for a 1969 work of Native American literature …), but there’s a damn typo in John Maynard Keynes. This is one of 44 photos of the plaques in this set on Flickr. 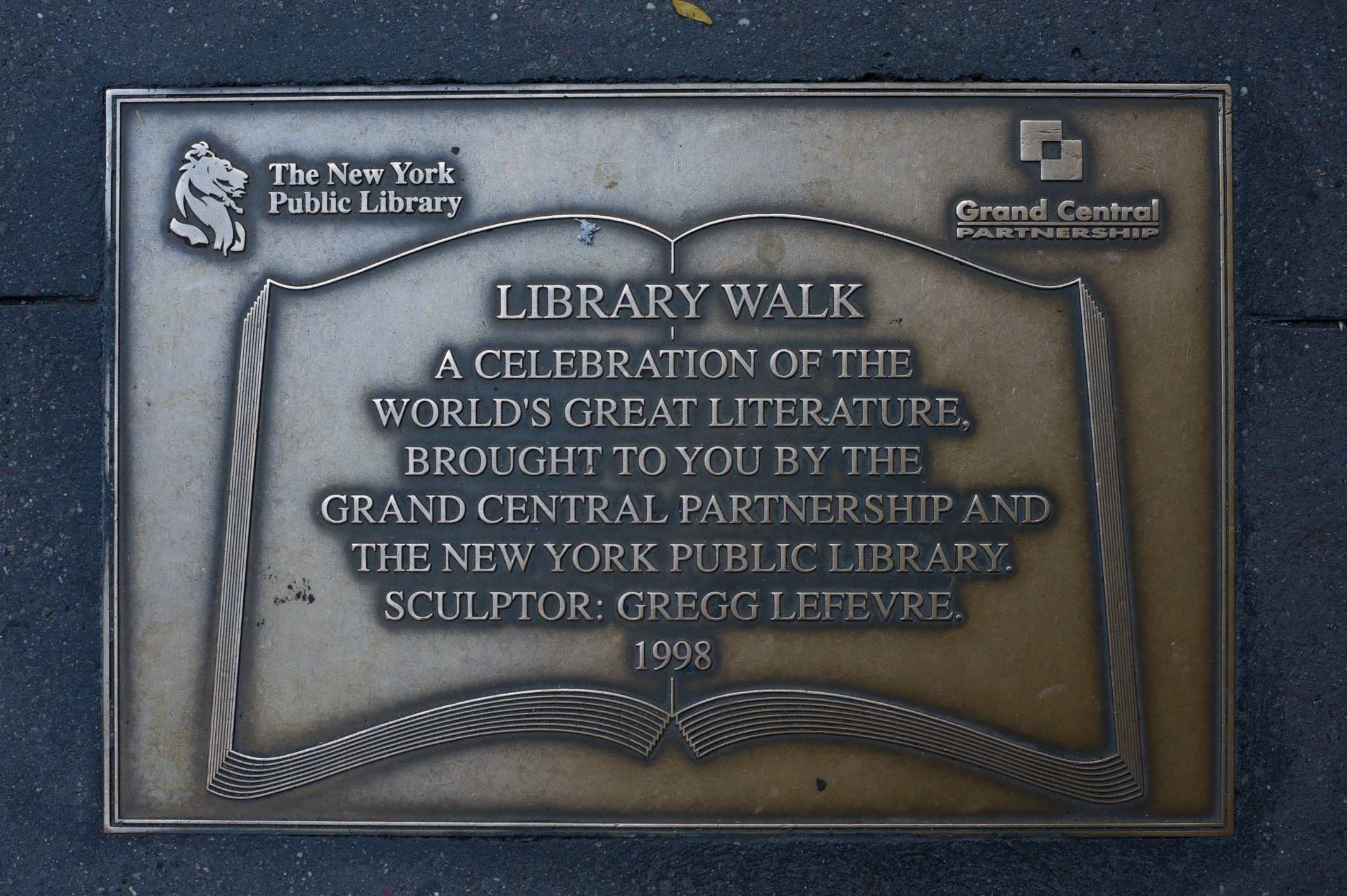 Title panel (top) — Those pages look like quick Bézier constructions, reflected and duplicated. The page block of a real book does not have that thinness in the middle. The book is inexplicably unbound.

Of course, it’s not at all uncommon for public art and architecture to have minor or peripheral typographic aspects that are badly executed, and thus to provoke disappointed mutterings from specialists in forums such as Fonts In Use. The Library Way series, though, is typographic to its very core, and it’s no exaggeration to say that the artist has been grossly negligent. Furthermore, the critics in the New York Times, the Washington Post, and Huffington Post deserve extra censure for their fawning reviews, that demonstrate a blindness to the most glaring typographical ineptitude.

Laurence Penney is a consultant in font technology and font marketing, based in Bristol, England. In 1999 he became part of the initial MyFonts.com team, and helped create the site’s unique balance between “newbie appeal” and an extensive typographic resource. He now develops in-house software, contributes editorial content, and co-manages the distributor’s contacts with foundries and designers.

Dehonians – The Priests of the Sacred Heart of Jesus2020